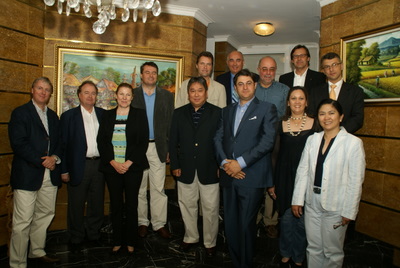 You have been travelling a lot around the country on business. Have you found a place or destination in Bulgaria that became your favourite?
Bulgaria is a country blessed with beautiful natural beauty. As you may know I have been in this country for 3 years now and I have been privileged to see lots of places. Each city or village have their own special kind of attraction and it is difficult to say which my favourite is among them. In the summertime, I like the cities along the Black Sea Coast because of the beautiful beaches, golf courses and historical sites which are exciting to explore. I also like going to Razlog, where I could play golf and admire the beautiful Pirin, Rila and Rhodope Mountains at the same time. Indeed, Bulgaria has so much potential as a tourist destination. With its lush beauty, its mountains and beaches, I could say that, “Bulgaria e krassiva strana”.
Which is your preferred Bulgarian dish or wine?
This is a bit difficult question to answer since basically I enjoy any kind of cuisine. However, I do enjoy Bulgarian salads and “shopska salad” tops my list. I also like Bulgarian grilled dishes accompanied by a very good Bulgarian red wine. As for the wine, I don’t really have a specific favourite since Bulgaria has so many good wines that they could be proud of, such as Raynoff, Todoroff and Enira. 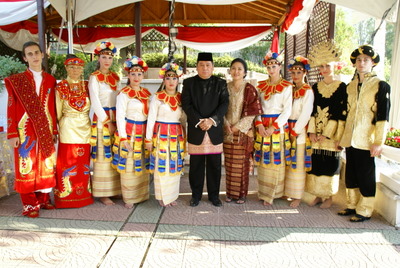 Your spouse, Mrs. Fely Rose Inkiriwang has been hosting many culinary events in our country. Is there an Indonesian recipe she would like to share with our readers?

Well, my wife has hosted several culinary events to promote Indonesian cuisine to the Bulgarians. It is very inspiring to note that although a lot of Bulgarians are not familiar with the Indonesian cuisine, they are curious to know about it. Owners of some restaurants show great interest in learning how to cook Indonesian food. I told them that if they learn how to cook them, they should make them available for their customers. In this way Indonesian cuisine could be promoted to the Bulgarians.
There is so much variety in our cuisine and the best way to really get to know it is by coming to Indonesia and do what we call “Wisata Kuliner” or Culinary Tourism where tourists enjoy typical local food from different provinces.
Generally, Indonesian cuisine is very tasty and spicy, and most often hot because of the use of hot red chilli peppers. Here in Bulgaria, in several events where we serve Indonesian cuisine, I noticed that Bulgarians and also other guests of foreign nationalities love the dadar gulung (green crepe with sweetened coconut filling); sate (beef, chicken, lamb, shrimps satay) and the nasi goreng/fried rice. Indonesia has a very rich and varied cuisine. One could just imagine that each of the 33 provinces have their own way of cooking a simple fried chicken, those are 33 recipes for you to learn.
Since most of the spices used in Indonesian cuisine could not be purchased here in Bulgaria, my wife has a simplified recipe for Indonesian Veal Stew or “Semur Daging” your readers could try at home.
“Semur Daging”
Veal Stew
Ingredients:
300 grams veal cut in ½ cm. Pieces
2 cloves garlic
1 onion, thinly sliced
1 red chilli, finely sliced or ground
1 soup spoon of margarine
¼ teaspoon white pepper
2 soup spoons sweet soy sauce
200 ml. Hot water
2 pieces cloves
Pinch of ground nutmeg
1 cm. Cinnamon stick
Procedure:
1.                  Fry the garlic and onion with margarine in a deep frying pan
2.                  Add the veal and sweet soy sauce, salt, white pepper, clove, cinnamon and nutmeg.
3.                  Add hot water. Cook in low heat until the meat softens.
4.                  Add the sliced red chilli and serve hot.
Your Excellency, which side of your character has been of greatest help to your career? 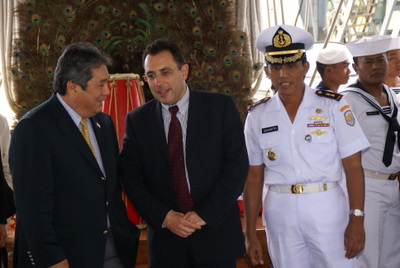 I could say that I am a man of action who wants to get results and, mission oriented. I am easily adjusted to any environment and could easily adapt to any situation I am in. It is therefore very important to have as many friends that I can have, and this will facilitate in what I should and would like to achieve. Seriousness, friendship, a sense of responsibility are of high value to me and I live by the words, Ora et Labora, meaning, “Pray and Work”.
Diplomatic relations between Indonesia and Bulgaria were established in 1956. The 4th session of the Joint Committee on Economic Cooperation between the Government of the Republic of Indonesia and the Government of the Republic of Bulgaria was held in Sofia, 31 May – 1 June 2010. Please, highlight some of the major accomplishments of the cooperation between our two countries so far.
Indonesia and Bulgaria have been enjoying cordial relations for 54 years and since then there is a lot of potentials to further enhance bilateral relations, especially in the economic spheres (trade, tourism, investment).
The Joint Committee session had an exchange of views on the political and economic situation in the two countries and reviewed both countries’ economic developments, as well as of bilateral economic cooperation in specific areas of mutual interests, and provide a new impetus to cooperation in various fields, including trade; investment; energy; tourism; agriculture and food; transport, information technology and communications, maritime shipping. Both delegations also highlighted Bulgaria’s role as Indonesia’s gateway to Europe and the significance of Indonesia as Bulgaria’s access point to Southeast Asia.  The agreements reached, among others, to establish two working groups on energy and agriculture; encourage direct contacts between government bodies and private entities, the exchange of official and business visits, as well as mutual participation in various events and cooperation activities; strive to increase the volume of trade, as well as diversify the bilateral trade baskets; the importance of cooperation between both countries Chamber of Commerce and Industry; the need to renew efforts were necessary in order to boost collaboration in tourism; and the need to re-activate cooperation in the exchange of news between the Indonesian National News Agency “Antara” with the Bulgarian Telegraph Agency (BTA).
The Joint Committee also welcomed the signing of the Agreement between the Government of the Republic of Indonesia and the Government of the Republic of Bulgaria on Visa Exemption for holders of Diplomatic and Service Passports; the convening of an Indonesia-Bulgaria Intercultural and Interfaith Dialogue “Managing Tolerance, Respect and Understanding in the Religious Community: Indonesia and Bulgaria Experience”; opening of an Indonesian language teaching in Sofia University; and the establishment of sister city cooperation between Surakarta and Montana; the signing of Letter of Intent and a plan on signing of MOU on sister city cooperation between Surabaya and Varna by this year, as well as sister city cooperation between Medan and Burgas in the near future. 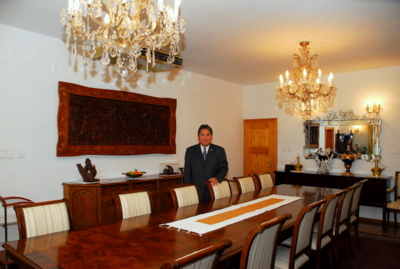 Your keen golf player. In May 2009 at the Indonesian residence was established the “Club Diplomatic and Business” (CDB) and you were named Honorary President. Could you describe golf as medium between business and diplomacy?
The CDB was patterned after the CDW (Club Diplomatie und Wirtschaft) in Vienna, Austria, having Ambassadors and diplomats, Austrian Foreign Ministry Officials and Austrian businessmen as its members. Mr. Krassi Guergov, president of the Bulgarian Golf Association, and Mr. Kiril Kalev, former Bulgarian Ambassador to Austria, are respectively the President and the Vice-President of CDB. I myself am the Honorary President with Ambassador Martin Klepetko of the Czech Republic and Ambassador Thomas Feller of Switzerland as the Honorary Vice-Presidents. On the day of its establishment, CDB  was honored with the presence of the President of the CDW in Vienna, Mr Josef Vuzem and his wife, Angelica Vuzem, Secretary of CDW.
On the assumption that most golfers are also businessmen, CDB was established as a means where Bulgarian businessmen and foreign Ambassadors to Bulgaria could meet with a view to enhancing economic cooperation. Although most of CDB’s activities are done through golf, this is not a golf club. It is more of a medium where Bulgarian businessmen meet, play golf, and discuss business opportunities and interests with countries represented by the Ambassadors.
I am happy to note that golf is becoming more popular here in Bulgaria within the business community and also in the diplomatic corps. On 16 October 2010, there will be a Diplomatic Golf Tournament to be held in the Pirin Golf and Country Club, under the patronage of Foreign Minister Nickolay Mladenov.
Do you find any similarities between the Bulgarian and Indonesian people?
There are many similarities between the Bulgarian and Indonesian people.
We both value our rich cultural heritage and we are strongly influenced by our traditions. We value close family ties characterized by our affinity to our extended family. Religion plays an important role in the lives of Bulgarians and Indonesians alike. 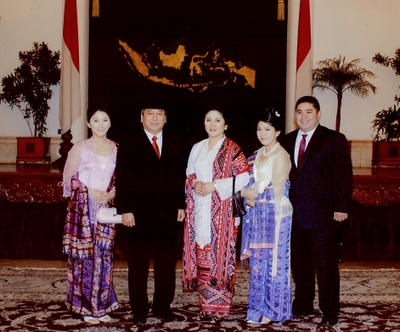 H.E.Mr. Inkiriwang with his family at the Indonesian Presidential Palace
photos: personal archive

Would you like to send a brief message to Bulgaria people?

Since its membership to the EU, Bulgaria’s horizons have broadened in every aspect. Its economic potentials are being rediscovered by other countries since it has established itself as a gateway of products from the east to Europe. Friendly relations should be maintained not only with its neighbours but also with nations far away, especially Indonesia.
Bulgaria is naturally endowed by fertile lands, beautiful sceneries and possesses a rich cultural heritage. Its potentials should be recognized, appreciated and put to good use by the Bulgarians themselves. Bulgaria would progress if the Bulgarians would pool together their talents and efforts to make it so.
To know and appreciate how beautiful the world we leave in, it is a must to visit Indonesia. From the economic point of view, doing business with Indonesia would, among others, help Bulgaria recover from the economic crisis. 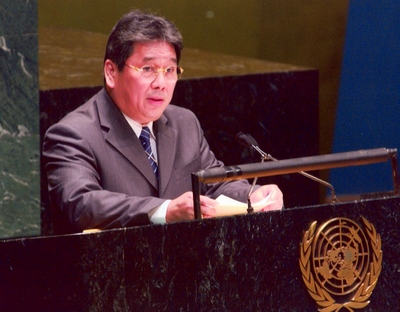 This interview is produced solely to ADIS Magazine. No part of this interview may be reproduced in any other way without prior written consent of ADIS Real Estate.